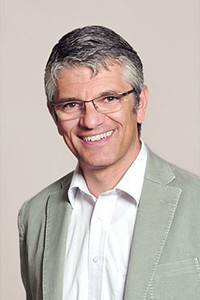 As a clinician and clinical researcher, Prof. Manuel Battegay has been active in the field of HIV/AIDS since 1988. He is particularly interested in the clinical course of HIV, namely the optimisation of the response to therapy and immune reconstitution as well as on psychosocial issues. Since 1994, he has been a board member of the Swiss HIV Cohort Study Group and chaired the Scientific Board from 1998-2002. Since 2006, he has been a member of the Governing Board of the European AIDS Clinical Society (EACS). He became President of the Society in 2012 after acting as vice-president for four years. He was co-chair of the 14th and 15th EACS Conferences in Brussels in 2013 and Barcelona in 2015, respectively. He is a faculty member of International Antiviral Society-USA and member of the scientific committee of the biennial Glasgow International Congress on Drug Therapy in HIV Infection. Along with the Swiss Tropical and Public Health Institute, he actively participated in upbuilding a large rural HIV Clinic at the St. Francis Referral Hospital in Ifakara, Tanzania.

His current research focuses on improving the response to antiviral therapy, specifically immune reconstitution and aspects related directly to HIV antiviral therapy and other topics in Infectious Diseases.