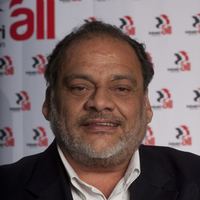 Fernando Lopes was elected as Assistant General Secretary of IndustriALL Global Union at its founding Congress on 19 June 2012.

Previously he was the Assistant General Secretary of the International Metalworkers' Federation (IMF), elected at its 32nd World Congress in May 2009.

Fernando has a long history in the labour movement in Brazil, first getting involved in the workers’ party (PT) while studying mechanical engineering in the northern state of Maranhão during the 1970s.

After 13 years of political work in Maranhão, Fernando was forced to move to Bahia in 1987 due to political persecution. Here he began working as a maintenance engineer at the Bahia Steel Mill and with the local union, becoming a member of the executive committee of the metalworkers’ union of Bahia and then of the National Confederation of Metalworkers (CNM) of the national trade union centre CUT.

Fernando was elected general secretary of CNM/CUT in 2001 and served on the IMF Executive Committee from 2003 to 2005 and its Secretariat from 2007.