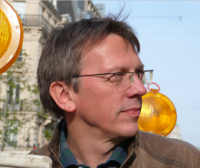 Wolfgang Petzold is deputy director for communications at the European Committee of the Regions (CoR) in Brussels, for which he works since 2008. Before that, he was an official for ten years in different Directorates-General of the European Commission, and for another ten years in regional ministries in Bremen on EU affairs. Wolfgang Petzold holds a degree in sociology, is part-time lecturer for European Studies at the University for Applied Sciences in Bremen and the University of Osnabrück and publishes occasionally in journals and books in particular on EU cohesion policy.