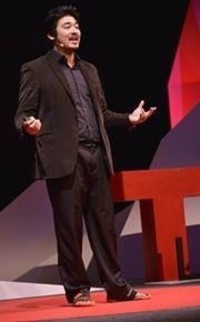 Yu-kai Chou is a Pioneer and International Keynote Speaker on Gamification, and the Original Creator of The Complete Gamification Framework: Octalysis. He is the President of The Octalysis Group and has been a regular speaker/lecturer on Gamification Worldwide, including at organizations like Stanford University, Accenture, Tedx, SxSW, Gamified India, Huawei, the Innovation Center in Denmark, Kingdom of Bahrain, and many more.

Yu-kai was one of the earliest pioneers in Gamifcation, starting his work in the industry in 2003 and in 2013 and 2014 was rated the #1 Gamification Guru by the World Gamification Congress as well as UK-Based organization Rise (not to say that he is actually the best at anything, but something nice to have on a Bio). He has helped a variety of companies, from seed stage startups to Fortune 500 companies such as eBay, HP, Cisco, Wells Fargo, and more.

Previously, Yu-kai was the Co-Founder and CEO of RewardMe, a digital loyalty platform that gamified offline commerce that was rated by AlwaysOn as one of the Top 10 Private Companies to Watch. RewardMe also won Best Commercial App at the first location-based service awards “The Locals.”

Prior to RewardMe, Yu-kai founded a variety of startups, including FDCareer (rated on Mashable as one of the Top 10 Social Networks for Gen-Ys) and Viralogy, a Social Media Rank much like Klout today.

Yu-kai is a Board Director for the California Student Sustainability Coalition, and was elected a Top 50 Young Leaders of California to attend Arnold Schwarzenegger’s Governor Global Climate Summit along with the leaders of each nation. He is also a Board Advisor for many organizations and companies through out North America, Europe, and Asia, including Morf Media, BALANCE Edutainment (creators of Pacha’s Pajamas), Loki Studios (creators of Geomon and sold to a large technology company), Powzy (mobile game monetization platform) and RedCarpet (Offline Loyalty Platform in India), Plug.DJ, Lucky Diem, and many more.

Yu-kai is a follower of Christ, and his other hobbies include playing/teaching chess, writing/playing string quartet pieces, writing Chinese novels, rating high quality movies, though he rarely has time for these hobbies.