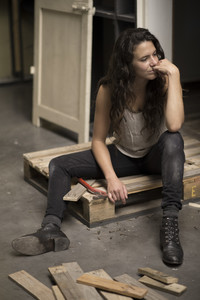 Faye Mullen’s work is informed by a sculptural sensibility combining elements of performance, site, sound, light and image - both moving and still. Informed by time and place, the practice she pursues is self-reflective and considers itself as precisely such - a practice. Characterized by a sustained interest in content, form, materiality and weight, her studio practice acknowledges weight as it bears what is physical as much as immaterial.

Faye studied at l’École National Supérieure des Beaux-Arts in Paris, Ontario College of Art and Design in Toronto as well as the University of Toronto where she received her masters. Faye has participated in several artist residencies including a two-year post-graduate residency at le Fresnoy, Studio National des Arts Contemporains. Her work has been exhibited internationally in solo and curated group shows in Australia, Canada, France, Germany, Poland, South Korea, Spain, the UK and the US. Currently, Faye currently situates her practice between Toronto (Canada) and Roubaix (France).