What roles do citizenship and participation play in integration? 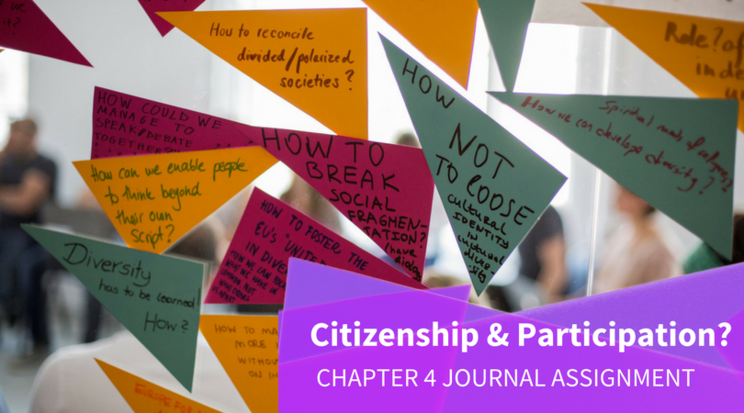 Tell us: What roles do citizenship and participation play in integration?

In Chapter 4, we've taken a look at some of the more tangible parts of the journey from 'foreigner' to citizen: naturalization, participation, and which policies and attitudes matter towards making someone feel as though they belong. We imagine that many of you have personal experiences with these topics or opinions on how they should be handled for those coming to your countries. We'd love for you to share them with the 'Us' & 'Them' course community here!

Here are some guiding questions to draw from:
- How do you define 'diversity' and how did you 'learn it' (or how do you think you still need to learn it?)
- What types of major divides or cleavages do you most see in your society? Are these along the lines of immigrant vs. native or other groups?
- How easy or hard do you think it should be for immigrants or refugees to gain citizenship of their new country? Do you think people should be able to maintain dual citizenship or do you see this as problematic for integration?
- What is one thing that you find especially important to feeling like you belong to your society (or what do you think it would be if you moved to a new place)?

Now what?
Click 'Start in Journal', and fill out the entry. How you do this is up to you: You can use just words, or add pictures or links to articles or videos to highlight your point!

Is this journal assignment required?
No! Nothing in our course is 'required', and there are no grades, but we encourage you to reflect on these topics and share if you feel comfortable, so that others in the course can benefit from your experiences.

Diversity and Integration in Ghana

I. How do you define diversity and how did you learn it? The birth of mankind varies from one environment to another. The values taught in the home or learned in one environment, creed, language(s) spoken, national policies on education among others defines mankind hence diversity is the difference in the aforementioned factors to an individual or group that has that “feeling of not belonging or part of an individual or group”.
Growing up as a child among people of my own tribe I was privileged to live among hospital staff since my mum was a nurse hence identified first and foremost that; we have different tribes in the country as a result of the background of some staff in the MEDICAL Village.
Also, the history of the country taught in social studies in school did mentioned about the diversity as well especially in respect to migration.
Finally, among my own tribe; I did discovered that, there’s difference between the language spoken in relation to meaning of some words and the ascent. You may google the Migration of the EWES in Ghana or Gold Coast.

II. What types of major divides or cleavage do you most see in your society? Are these along the lines of immigrant vs native or other groups?
The cleavage I see is among the different tribes in the country especially in body politics. For example, the founder of the major opposition party (National Democratic Party) in Ghana comes from the Volta Region and with allied from the Northern Region hence people from these regions tends to be sympathetic to this party irrespective of their policies and same for the incumbent whose forbearers are mostly from the Akan extraction (New Patriotic Party).
In article 42 of the Constitution only citizens are required to vote however, due to the migration history of two (2) dorminant parties founders; it’s a known fact / allegation that; they lured voters from the surrounding countries especially Togo, Benin and Cote D’voire to vote for them since they tend to bear the same names.
On the otherhand, immigrant and native only happened when they breached the law of the land. For example, immigrants are not to undertake retail business but Nigerians and Chinese are into this business. Chinese are busily destroying our water bodies and environment as a result of illegal mining activities. See the picture insert.
![Chinese in Illegal Mining in Akyem Topremang - Denkyembour District; Ghana(https://iversity.s3-eu-west-1.amazonaws.com/image-uploads/2413740-60df7fff840c6a2082ef5122548f84f1_thumb.jpg)A Chinese illegal mining activity at Akyem Topremang in the Denkyembour District. They in tend sell the sand from their illegal activities hence leaves the dam uncovered. The swift response by the President has led to the confiscation of their equipment’s and are currently standing trial.
The rate of armed robbery in the country is also alarming and most of this immigrants are involved in this activities mostly Nigerians and other nationals. Source; Ghana Police Service PRO during interviews with the media.

III. How easy or hard do you think it should be for immigrant or refugees to gain citizenship of their new country? It’s difficult to be specific but it must be depending on the track record of the individual involved. For example, Muslims in UK wants citizenship but what do we see; suicide killings and bombings of innocent lives and in Europe; because they want to impose their beliefs on others whereas no faith is allowed in their Islamic States especially Saudi Arabia. The country of origin of each individual applicant must be considered to determine their core values and beliefs first and foremost. Secondly, from the time the individual has arrived in their new country; what is their track record (no criminal records, hate speeches etc) and finally, before citizenship is gained; it must have a revocation clause to deter people from abusing it. My thought

IV. Do you think people should be able to maintain dual citizenship or do you see this as problematic for integration? In the case of Ghana, when the fourth Republican Constitution came to being on 7th January, 1993; dual citizenship was not allowed but repealed along the line hence most Ghanaians do have dual citizenship status however, are forbidden from holding certain public offices e.g. President, Member of Parliament, Security Chiefs etc
On the other hand, for integration in relation to dual citizenship is problematic becomes where lies the allegiance of the individual involved? You can never serve two (2) masters thus for a successful integration; people need to be educated on that.

V. What is one thing you find especially important to feeling like you belong to your society? No discrimination to a larger extent of what tribe I belong.
In conclusion, citizens have the right to participate in all activities of the state including voting which is the preserve here to all Ghanaians (Article 42 of the Ghana Constitution). However, immigrants can’t vote but can contribute without fear to discussions in groups but not on national policy among others. For example, the immediate past diplomat of the UK High Commission to Ghana; H.E Jon Benjamin adopted the posture of contributing to Ghanaians societal and national issues on social media that is on twitter but majority of the natives were angered about this because he is seen as not part. Diplomatic immunity protected him. My thoughts as well.

Hello Mr. Ernest! Thanks for your comprehensive thoughts. Jumping to your notes on citizenship, I'm curious about what you wrote here:

"The country of origin of each individual applicant must be considered to determine their core values and beliefs first and foremost. Secondly, from the time the individual has arrived in their new country; what is their track record (no criminal records, hate speeches etc) and finally, before citizenship is gained; it must have a revocation clause to deter people from abusing it. "

The first line especially interests me, because as we've been seeing throughout this course and in the comments, where someone comes from may only be one aspect of their identity, and perhaps not even a major one - yet it's still often how we generalize about people. So yes, while countries of course have to do proper screenings of asylum seekers and refugees, I wonder how much we can know about a person because of what country they come from. Do you think there are many shared values and beliefs that can transcend specific countries?

Hello Sophia! Yes it has to be considered in my opinion but that does not suggest we are generalizing everything. For example, people from Islamic States like Saudi Arabia believes in Sharia, Jihad and all must be Muslims hence there's no will of the people. If such people come to seek asylum or whatever the purpose of the travel to another country; the likelihood of influencing people with these beliefs are high though there are exceptions. It has been reported in the US and Europe where Asylum Seekers especially Imams and faithfuls tend to propagate their messages through hate speeches. Northern State of Nigeria is also a typical example in West Africa with the insurgence of bokor haram and others. Whereas, people from other creed especially Christians, liberals, atheist tend to accommodate all views among others though there are exceptions here as well as in the case of Jehovah Witness being banned in Russia.
Values and beliefs are learnt from the family system, the environment and the national setting hence the probability of one being what they are is high.
Further, Germany became a country of immigration in 2001 but there's still work to be done to educate citizens to accept and accommodate others from different backgrounds however, it's easier to be accepted in Canada basically due to the factors mentioned for the individual that is, values and beliefs of the family, environment and nation.
In conclusion, I don't hate any person or group of people but in as much as we believe in diversity and integration; we must be vigilant and cautious as well not to defeat it's purpose and objective.
Thanks