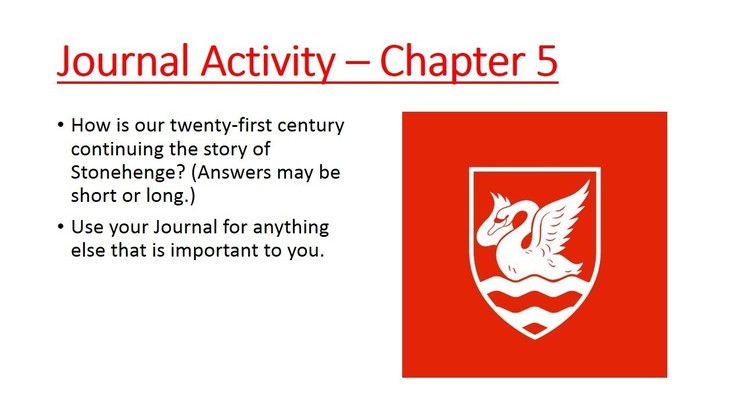 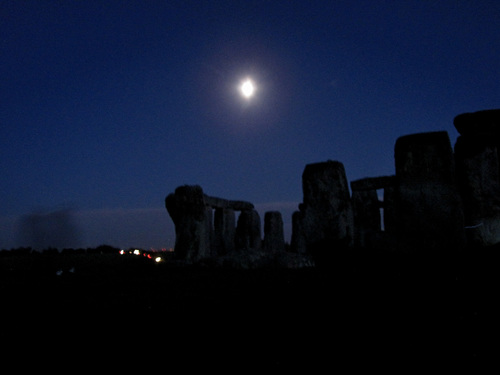 The Story of Stonehenge - what are we looking at today, a developing myth, an increasing body of knowledge or a deeper understanding of the lives of Neolithic people in Britain? And questions arise which may not have troubled our antecedents who studied Stonehenge – how do we make it pay for itself, and how do we ensure we cater for the needs of those who want to visit the monument?

Research continues. From 2003 to 2008, the Riverside Project, led by Mike Parker Pearson and Sheffied, Manchester, Bouremouth, Bristol and UCL universities investigated Durrington Walls, a settlement near Stonehenge, which yielded evidence of dwellings and timber circles dating from the later phases of Stonehenge, possibly either the builders or celebrants of Stonehenge itself, or maybe both. 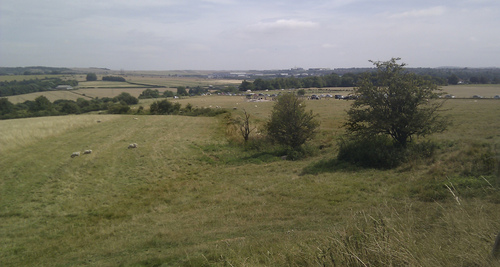 He went on to study and excavate in the Preseli Hills with researchers from UCL, University of Manchester, Bournemouth University, University of Southampton, University of Leicester, Amgueddfa Cymru – National Museum Wales, and Dyfed Archaeological Trust and identify the source of the Bluestones used at Stonehenge, though many questions regarding their journey and possible other uses remain to be answered.

The Hidden Landscape Project, run by Ludwig Boltzmann Institute and University Birmingham, used Geophysical techniques to study the whole area around Stonehenge and discovered that Stonehenge did not sit in splendid isolation but was surrounded by other monuments, rings, barrows, a palisade and pits, which could lead to quite a different view of the location in the Neolithic. These features have not been excavated yet, so no dating or other evidence has enriched the story which they contain, and which might well change aspects of how we interpret the landscape and the stones in the future. 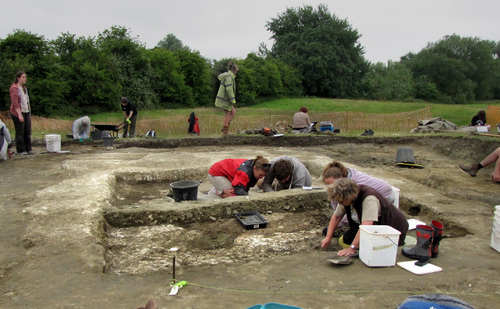 Other sites near Stonehenge, notably Avebury and Marden Henge have had recent excavations, adding to our knowledge of the whole ‘World Heritage’ landscape, and we have yet to work out how all of these would have related to one another at the times they were in use. Even at Larkhill, where the Army have cleared a site for new house building for returning troops and their families, the remains of a middle Neolithic causewayed enclose was found, and at Bulford, within the same project, a double henge was found, unique in Britain, and dated 2,900BC, at time when Stonehenge would have been busy, only 6 miles away, as the crow, or maybe jackdaw flies. 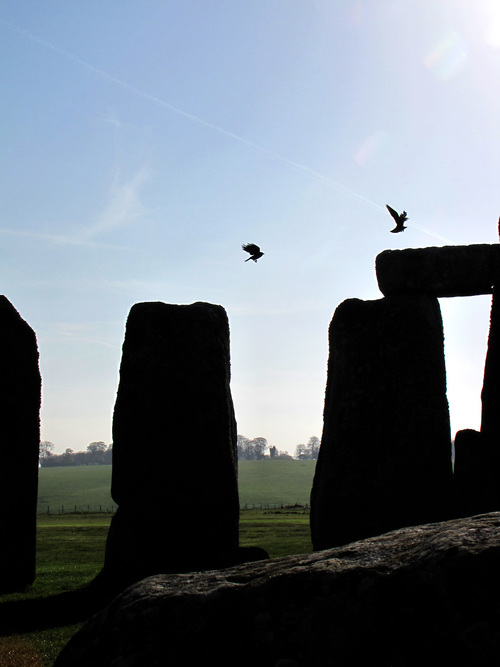 Jackdaws, nesting high up on the Sarsens

And whilst it is fine for the army to totally remove an ancient site and build over it, the special nature of the site is deemed so important that non-military traffic is going to be funnelled into a tunnel, if everything goes to plan. The aim of this is to leave an open, silent landscape but for the birds and sheep and Stonehenge visitors, somewhat like the stately homes in their Capability Brown landscaped gardens of the 18th century rich, rather than the bustling, lively landscapes which are more frequently found around medieval cathedrals or castles in their heydays or the encampments around the main stage at Glastonbury festival, surely a place where modern people celebrate their heroes, confirm their identities and unite in feasting. However, much debate is taking place about the route of this tunnel, especially the location of its entrances, and how these would affect the solar aspects of the stone circle, and even the integrity of Blick Mead and its thermal spring.

Stonehenge Visitor Centre in the Snow

Also, with the hope of improving the visitor experience at Stonehenge, English Heritage and the National Trust have come together to make accessible the landscape as it currently stands, and to provide appropriate facilities for visitors. The new Visitor Centre is undoubtedly a great improvement on its predecessor, with a splendid gallery containing original artefacts, models, pictures, videos and explanations of the ancient site and its development through the millennia. There is a café with snacks, and a shop and spaces that can be used for visiting school and other groups. In addition there are some reconstructions of the houses found at Durrington Walls in the hopes that the visitors can gain a better understanding of life at the time when Stonehenge was built. English Heritage is suffering a little from being a newly created independent charity which has to create its own funding, having been part of the government body responsible for ancient monuments and also listing of properties and many other responsibilities, which now rest with Historic England. As such, EH is still developing the right approach to its responsibilities and gets both praise and criticism, which will hopefully help it steer the best route for the future. 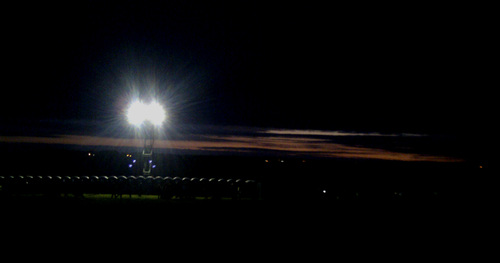 Palisade of Portaloos awaiting sunrise at the solstice

Whether it is on site at Stonehenge, through learning sites such as this, by the University of Buckingham, through television programmes to catch the public eye, Tweets, blogs, websites or any other means, those interested in continuing to develop the story of Stonehenge now have many of the concerns of the past and many more that were not considered – will there be equal access to the monument and its facilities for, for example, people of all nations, creeds, abilities, financial means and any other considerations that are considered to need special thought? How can the custodians of such an important icon accommodate the sometimes conflicting requirements of, for example, the Druids and the osteoarchaeologists? What would be the sensitivities of female visitors form certain cultures when they find that male cleaners come into the toilets? And talking of toilets, car parks, café services and all those practical matters, how does one cater for the 200,000 visitors in the month of August and the much smaller numbers in the winter, without providing facilities which stand unused for many months of the year. Difficult though these issues are, it is the coach loads of tourists, the bus loads of school children and the thousands of other visitors who provide the funds and the raison d’etre for the centre as it tries to be. 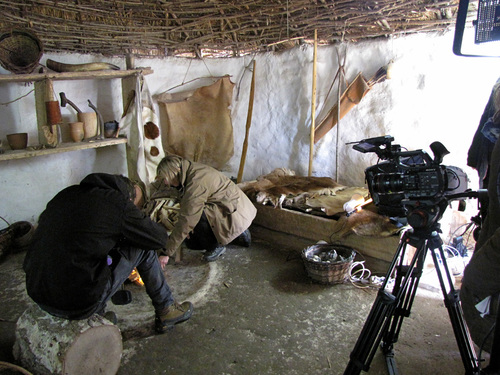 Filming cheesemaking in the Neolithic Houses

And lastly I return to the Neolithic life, and the important and exciting role of experimental archaeology. There has been a realization that the best academic brain in the world cannot always deduce, from archaeological remains, the practicalities of life in an age when there was no written language for us to consult. Many theories about prehistoric life are now tested out, using materials and where possible, tools that were known to exist, or which could have been used at the relevant times. And to help bring a greater understanding of Neolithic life to the public, Stonehenge Visitor centre has teamed up with the Ancient Technology Centre (ATC) to provide a small village of houses based on those excavated at Durrington Walls.

Neolithic Houses nearing completion
The houses contain the tools and possessions that would have enabled a small group, possibly a family, to get on with the ordinary business of living, and perhaps helping to provide for someone who was building Stonehenge itself. Sometimes some of the experimental archaeologists, Neolithic practitioners or Stonehenge volunteers demonstrate the skills that were once common place. Visitors come from all over the world, and often talk of the similarities between traditional homes in their countries and the Neolithic houses. 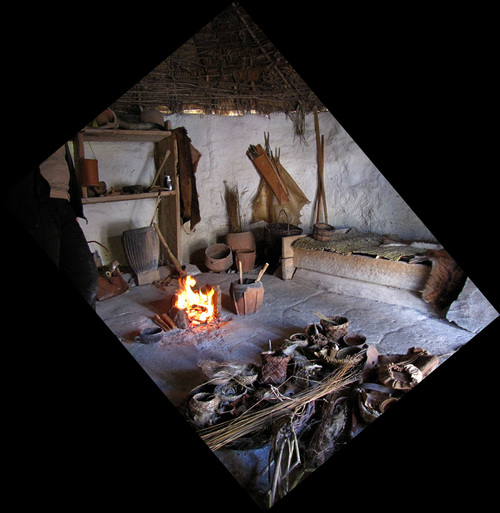 Bringing all these activities together, we can see that there is still a great interest in this unique monument, and that the Story of Stonehenge is far from finished. The research, the excavations, the interpretation and the experimentation will continue to uncover new aspects of life at the time, and education, exhibition and involvement will continue to share the experience with a much wider public. 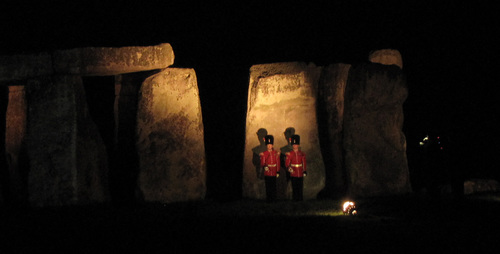 Flo hits the nail right on the head with this piece. Thank you Flo

Thanks guys. I volunteer there in the neolithic houses and there is so much going on for Stonehenge. I'm soooooo lucky to have this chance to be involved.

Thank you Charles, glad you feel it is approriate. We are, as I said, so lucky to be able to have the involvement we do.