Cross-cultural communication – are legal cultures compatible? Are their conflicts inevitable? What are their elements that give this world a chance? In this course You will compare legal techniques to see their potential in assuring the legal development.

The comparative research of the characteristics of legal techniques of different societies is necessary to understand the respective part of the development of law.
The course is focused on acquaintance by the students of the basic knowledge in comparing legal techniques, including the specifics of law-understanding, law-making, law-enforcement, law interpretation, systematization of law. The student will get a general impression about the emergence, development, functioning and interaction of different elements of legal techniques within their interaction in global society.

The course is addressed to a wide audience interested in Comparative Law, Comparing Legal Cultures, Legal Theory and Legal Technics, but primarily focused on applicants and students.

To take the course the student has to know the bases of the legal theory, as well as he should be able to apply the main methods of legal theory (the analysis, synthesis, deduction, induction, comparison, generalization, abstraction and others) and to use technologies of search for the information in scientific literature and the Internet.

After completing the course the student will know:

In addition, the student will be able:

Finally, the student will get:

The lecture module of the course is represented by the video-lectures and the manual text. The module of homework of the course presupposes the acquaintance with the additional material and literature to the lecture, the preparation for an intermediate and final assessment tests.
All modules are structured according to chapters.
The video-course has the following logic.

In Chapter 1. GROUNDS FOR THE COMPARATIVE APPROACH TO LEGAL TECHNIQUES you will learn the correspondence of legal techniques and legal activities. Also we shall discuss the problem of comparability and compatibility of legal cultures in comparing legal techniques.

In Chapter 2. THE NOTION OF LEGAL TECHNIQUE IN COMPARATIVE STUDIES you will study the "broad" and the “narrow” approaches to the legal technique. You will have a choice how to understand them. Is it law in general, or it is its cornerstone, or it reflects more than one aspect of legal reality, or whether it is identified only at one sphere of the law — the law-making activity. Finally, in this chapter we shall discuss the polysemy of a concept of the legal technique in Western legal literature.

In Chapter 3. CULTURAL CONTEXT OF COMPARING LEGAL TECHNIQUES you will get a general impression about the functional and instrumental orientation of social knowledge as the basis for the methodology of comparing legal techniques. We shall analyze the question of statics and dynamics of the law in comparative research as well as the appeal to culture in comparative studies of the legal phenomena. Finally, in this chapter we shall learn the concept of law as culture as a basis of comparing legal technics.

In Chapter 4. COMPARING LEGAL TECHNIQUES OF THE LAW-MAKING you will study the legislative process as a component of the law-making technique. We shall discuss the theoretical model of the legislative process of Ancient Rome and the ideas of Bentam presented in his "Principles of the Legislation" and "Introduction to the Bases of Morality and Legislations". Finally, in this chapter you will get general impression about the features of law-making activity in England and in the countries of the Civil Law family.

In Chapter 8. LEGAL TECHNIQUES AT THE BEGINNING OF CULTURE: SOME IDEAS TO UNDERSTAND THE LOGIC OF THE PROCESS OF DEVELOPMENT OF LAW we shall return to the past, to the pre-state societies. You will learn the methodological aspects of exploring legal technique at the beginning of culture. We shall analyze the phenomenon of syncretism of consciousness and social regulation in pre-state societies. You will get general impression about customary law and the cult of the ancestors as the basis of legal technique in pre-state societies. Finally, the aim of this chapter is to learn the historical logic of the process of development of law.

Intermediate assessment tests are represented after each section of the course. The test of each section consists of several questions. Criterion of completion by the student of a separate section is a half and more correct answers to questions of each test.
The final assessment is held in the form of total testing on all sections. 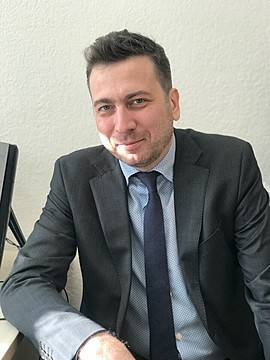 Associate Professor of the Department of Theory of Law and State, Deputy Director for Research of the Law Institute of RUDN University